“ My task is to help you choose the diet, the type of yoga and the most appropriate breathing techniques for your Ayurvedic constitution. Deepening in Yoga and Ayurveda, we gain in conscience and health.”

Born in Russia and nationalized in Spain, Elena Filippova began her personal yoga practice in 2002, following the teachings of the B.S.K. Iyengar in the Iyengar Yoga center of Madrid.
In 2015 she studied Transpersonal Therapy at the School of Transpersonal Development, beginning with holoscopic and holotropic breathing techniques, family constellations, Zen meditation, Vipassana, etc. The same year she experienced a change of consciousness that led her to move to Gran Canaria, where she continued to discover other yoga styles, such as Vinyasa Flow, Yin Yoga, Hatha vinyasa and Ashtanga among others.
In 2017 she moved to India to deepen her studies of Ayurveda, making an immersion in a clinic, beginning with ayurvedic doctors (vaidya) of sixth generation. She was studying the Vedic philosophy and the diagnoses, attending the consultations and studying the cases of real patients, receiving and practicing the Panchakarma treatment and delving into the Ayurvedic cuisine. Upon finishing her studies, she obtained the degree certified by the Uttaranchal University. In the following months of her residency in India, she was trained as a certified Yoga teacher (RYT 500 Multi-style & Yoga Therapy) by the Association for Yoga and Meditation (AYM), registered in Yoga Alliance USA.
She currently teaches regular Yoga classes in Power Yoga Canarias, also makes consultations and teaches lifestyle and food according to Ayurveda. 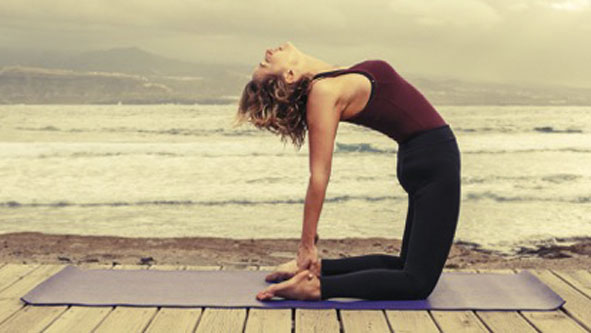